If you have not yet read the first post on how homeschooling can help your bullied child heal, click here.

In this post, I will be sharing the story of another parent who was willing to share the story of how homeschooling helped her gifted children recover from bullying.

The names have been changed to protect this family’s privacy.

If you are wondering about your child, their experiences with bullying and whether homeschooling could be a valid solution, this parent’s story may encourage you. 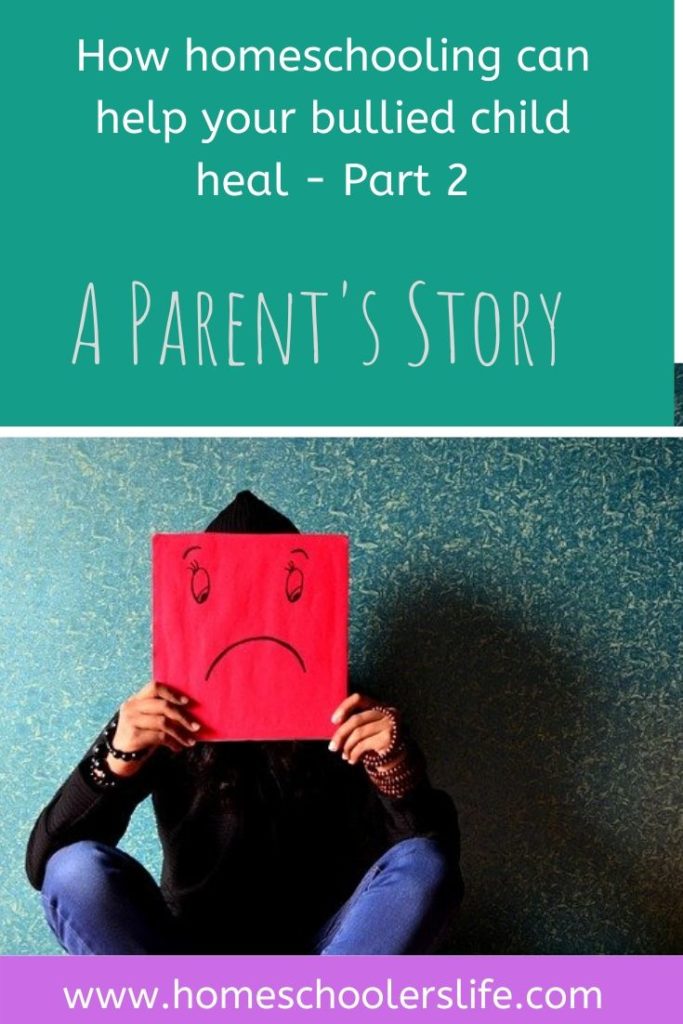 Janet’s story (not her real name)

When Jack was two, he had to have all of his top teeth removed as they were just absolutely brittle. When he was four, he was diagnosed with absence seizures. It just looked like he wasn’t all there – he would do a lot of autopilot type behaviors like suddenly standing up and walking around, etc. Jack was not aware of anything that transpired around him during a seizure. To the untrained eye, he would just look a little spaced out, if it was noticed at all.

By the time he went to school, he already had his work cut out for him (and for me, because who would take a 21-year-old mom seriously?). The Grade 1 teacher was informed about all of this, as obviously not having any teeth in the top of his jaw would affect his speech development and enunciation of words, etc.

Even so, she called me in the middle of term one day and told me she was very concerned as Jack’s speech is “severely impaired”, and that he was not “paying attention” in class. I asked her whether his vocabulary or pronunciation of words was the problem. She replied, “No, he is an exceptionally bright boy, but he mumbles and never smiles and that’s odd.”

The teacher even mocked him in front of classmates. His classmates called him “sleeping beauty” because of the seizures. In Grade 2, on Entrepreneur Day, the kids (now at a different school) figured out that making my son stress induces a seizure. They went for it – stole all the money he made and beat him up. He came home not knowing why he was bruised, but his true friends who defended him told him what happened.

Homeschooling, and healing, begin at last

Finally, we had had enough. We started homeschooling in Grade 3, in 2007. Homeschooling was NOT popular at all then, and family and friends were not supportive. Or maybe it was because I was only 24 years old? We received more push-back than you could possibly imagine. Family, friends, complete strangers would approach us if we were out during school hours, and angrily reprimand him for not being in school! Luckily for him, I have a very thick skin and I’m a feisty mama bear!

Teaching him was time-consuming because I had to wait for him to come out of it every time he had a seizure before continuing, but we persevered. (He outgrew the absence seizures by age 12.) My son has an incredible sense of justice, emotional maturity and never quite fit in with his peers. Moreover, it turned out that he also has a genius IQ.

Today, he is 21, working in the financial industry and his clients love him. His work is professional, highly competent and articulate. If he had stayed in school, the bullying would have continued and I could see him snapping. He is extremely thankful that we removed him from school.

In 2006, my daughter was born. When she was only two months old, I realized she was even more intense than her brother in every possible way. Google led me down the rabbit hole where I discovered Dabrowski’s over-excitabilities. What kid has a meltdown at two months old over a piece of fluff stuck between her toes?

She was far ahead with every milestone, more so than her brother. Both kids basically taught themselves to read around age 4/5, so I had my hands full. They always needed constant mental stimulation. Their curiosity knew no bounds.

Lauren is an artist in every sense of the word. She is the most sensitive and beautiful human being, and can be as stubborn as a goat! Her bright mind cannot stand stupidity, and she would rather have deep conversations about intellectual topics than typical playground discussions with peers. Welcome: social anxiety, general anxiety, ADD, OCD, probably some SPD, and plenty of creativity.

Her principal wanted to force her to do things their way and fit in with their robotic world. We tried that until Grade 3, and then no more. The principal’s kids actually bullied her and shoved her around. Playground tactics were destroying her confidence, causing anxiety.

Her recovery through homeschooling

It has taken four years of homeschooling to scratch the surface of her recovery. She was so broken, she started self-harming behaviors. Lauren would stay in her closet for hours while we “de-schooled.” She suffered severe depression because of bullying and still struggles to overcome all the traumas today.

In both my children, we tried mainstream, we tried private schools, we tried so hard. I felt that if I had not removed them from those toxic environments, they would have died. My daughter is now 13 and doing Grade 9 with a tutor (because I now work full-time) and she is SO much more relaxed.

School also was too slow for both my kids and the unnecessary repetition was overwhelming. They both grasp concepts easily and then want to move on. Mainstream schooling does not allow this.

Bullying is a challenge everywhere, but homeschooling is safer

I cannot imagine either of them going to a normal high school. Today, bullying is everywhere. Homeschooling isn’t the only solution. My daughter was still bullied by a child in her extra-curricular group. But at least she doesn’t have to face him daily in a normal school. She gets a break and loves her solitude as well.

What other tools helped my bullied children to heal

We tried various activities such as art therapy, pottery classes, drama, singing, dancing, and equine therapy. For kids, the world is just so overstimulating already, they don’t need the added stressors of bullying too. I removed them from toxic environments and made accommodations to their education. No homework stress, the kids could BE themselves.

Homeschooling doesn’t constantly bombard kids with other people’s ideas of who they should be. They have the freedom to decide with guidance and to heal.

It is a long and ongoing journey. Homeschooling is just one of many tools that helped my children heal from bullying. Each child needs something different. And it is our job as parents to guide them on THEIR path. Whatever that might be.

Ready to start your homeschooling journey? Check out the Beginner’s Guide to Homeschooling.